Thunderstruck II is an online slot game released in 2010 by Microgaming. It features five reels and 243 pay lines with an RTP (Return to Player) value of 96.95%. In other words, 96.95% of all bets received when playing this slot is returned to the players in the prize pool. In other words, the house edge or the percentage that the casino host takes is only 3.05%. 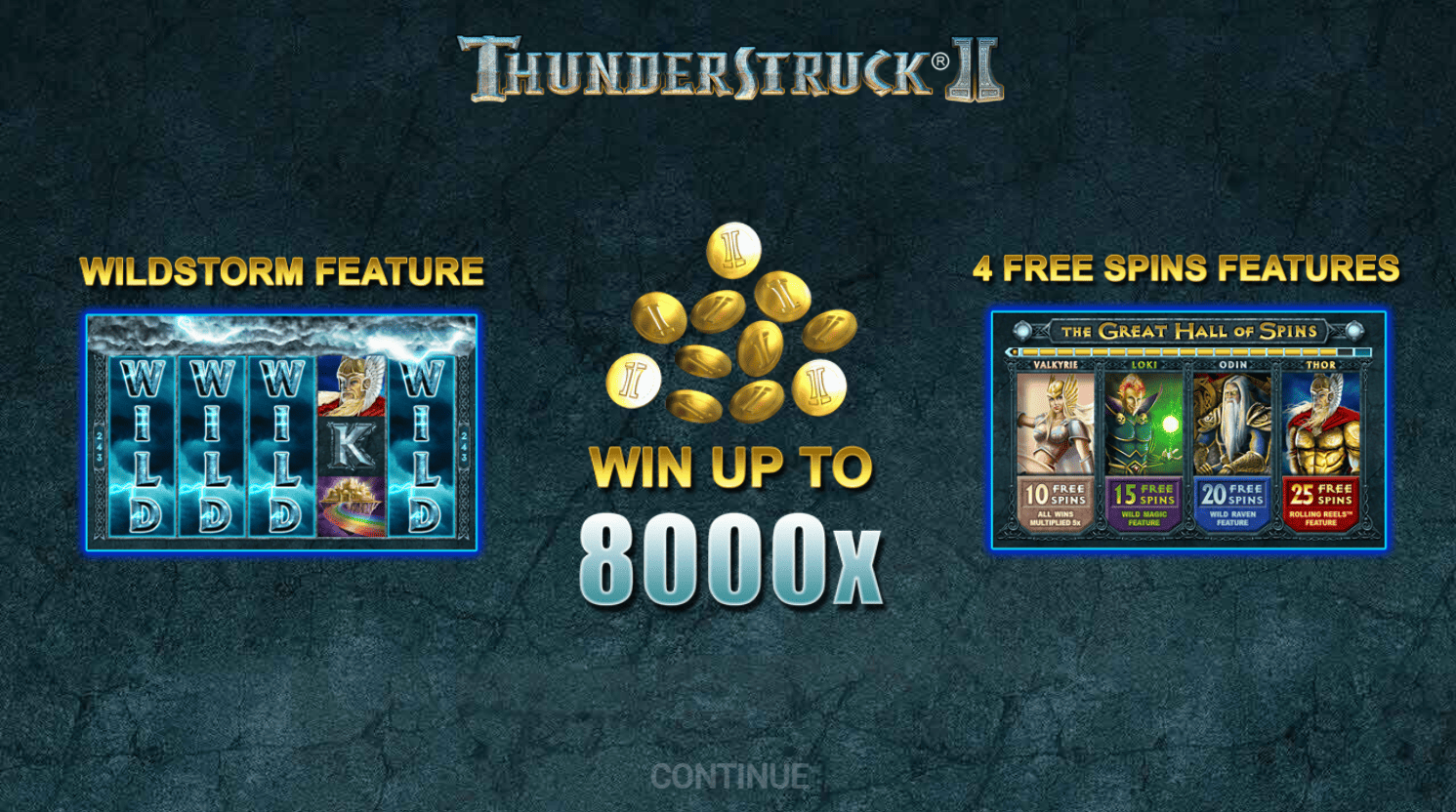 The 2010 slot is mainly about the Great Hall of Spins with five different free options gamers can benefit from. Additionally, it offers a randomly triggered Wildstorm feature, which turns up to five reels Wild that double all wins.

The slot is based on Norse Mythology, with symbols like Thor, Odin, Noki, and Valkyrie populating the reels. Thor’s Hammer is the Scatter that triggers the Great Hall of Spins. And Logo is the Wild that substitutes for all other regular symbols and doubles all wins when part of a winning combination.

Lastly, gamers will also find Viking ships on the reels as well as Valhalla. Stone playing cards or tablets represent the low-paying symbols.

Microgaming gave Thunderstruck II a subtle upgrade, nothing too drastic, so, in all senses, the remastered version’s look and feel are the same as the original slot. The gameplay is as compelling as ever, and the upgraded slot still features 5 reels and 243 paylines with the same RTP or 96.95% as the original game.

Placing bets starts at 30 GBP pence and ends at £15. The game's volatility setting is classed at low, translating into smaller, more frequent wins. However, the game is capable of paying out sizable prizes with multipliers of up to 8 100 times the original stake.

Both the original and upgraded versions utilize the classic Microgaming reel format, which used groundbreaking technology when it was first released. The slot is structured with 5 reels and 3 rows. In order to win, gamers must land 3 or more matching symbols one after each other from left to right on any of the three rows to win. While this is now considered simplistic compared with some of the latest new slot releases, it was revolutionary technology at the time. And this structure forms the foundation for the game’s ongoing appeal despite its apparent simplicity.

The original slot’s graphics were also groundbreaking at the time. Even though they are now technically outdated, combined with the in-game animations and the powerful music score, this slot delivers a strong sensory impression that leaves a lasting impression on players and drives the game’s continuing popularity despite its seemingly outdated technology.

As described above, Thunderstruck II Remastered is based on Norse Mythology. Symbols seen on the reels include 9-A royals represented as stone cards, a ship, a Valkyrie, Loki, Odin, and Thor. The multiplier values range from 1.67 times your bet for 5 9-A royals up to 16.67 times the stake for 5 Thor symbols. The Logo symbol is valuable when landed in a combination of 5 symbols. It raises the value of the stake by 33.33 times the original bet.

The remastered version also has the Wilds feature. The Logo Wild is an excellent symbol to land because it is a substitute for any other pay symbol, and it doubles the value of any combination of symbols it is part of.

This game also has the same features as the original game. These features can appear at any moment, or they take time to earn. Consequently, let’s consider a few of these features.

Apart from the fact that this feature can appear on any base game spin, this feature turns the 5 reels totally wild. Ergo, they spin as though they are out of control. To activate this feature, Thor leaps onto the grid to electrify the game. And the outcome can be extremely profitable because the wildly spinning reels are worth 8 100 times the original stake.

The Great Hall of Spins come in four varieties with different modifiers and rewards. Each array is unlocked in sequential order as players trigger bonus rounds. The key to unlocking these bonus rounds is when 3 or more of the Mjolnir scatter symbols are simultaneously landed. Let’s look at each in order of their appearance and value.

3. Valkyrie free spins: This reward is available from the first bonus game, can be retriggered, and awards 10 free spins with all wins multiplied by 5x the original stake.

5. Odin: Odin comes into play after the tenth bonus trigger and includes 20 free spins and the Wild Raven feature. Two ravens hover above the reels and occasionally drop onto a symbol to turn it into a 2x or 3x multiplier. When both ravens land together, the multiplier is increased to 6x the original bet.

6. Thor: This feature is accessible from the fifteenth bonus trigger and comes with 25 spins and the Rolling Reels feature. This feature removes winning combinations from the grid so that new symbols can drop into the gaps, providing more opportunities to win on the same spin. Additionally, the multipliers increase after the first Rolling Reels win, starting at 2x and ending at 5x for consecutive wins.