Bitcoin Price Hike: What You Need to Know About the Evident Rise of Bitcoin

Ever since Bitcoin is introduced, it has made tons of headlines in the past. While the currency saw a fall in the last few years, it has taken an epic surge with its record high in the present time. So, what is it about Bitcoin that makes it such a rewarding currency? Let’s get to know about the latest development in Bitcoin price hikes right here.

A Brief History of Bitcoin

Bitcoin is one of the first mainstream cryptocurrencies that was first mined by Satoshi Nakamoto in 2008. Subsequently, its first open-source client was created by SourceForge the same year.

In nutshell, Bitcoin is a digital currency that doesn’t have a central banking authority and is based on a peer-to-peer network. All the transactions are based on rewarding after the mining process and are recorded via a distributed ledger. As of now, it is estimated to have more than 60 million unique users worldwide.

As the mining and trading of Bitcoin paced up, more and more companies started accepting it as a mode of payment. For instance, by 2012, more than 100 merchants were accepting Bitcoins. While cryptocurrencies suffered a crash in 2018, they are on a record high these days with even brands like PayPal now allowing the transaction of Bitcoins.

The Rise, Fall, and Rise of Bitcoin

When Bitcoins were initially introduced, they didn’t have much value. For instance, in 2010, one Bitcoin was evaluated at just $0.01 while by April 2011, it was only worth $1. Gradually, as it was accepted by other merchants and became mainstream, its valuation crossed $5000 for the first time in 2017.

Subsequently, the transactions of cryptocurrencies increased, and it drastically boosted the overall worth of Bitcoin too. In December 2017, one Bitcoin was worth around $19K, which was its record high back then.

Though, in 2018, the Bitcoin bubble was busted as it faced a sudden fall in its evaluation due to restrictions put by a few countries and other issues. By December 2018, one Bitcoin was worth only $3,300, which was extremely low compared to its 2017 evaluation.

Thankfully, as Bitcoin became more mainstream and various countries started accepting the currency, it boosted its overall worth as well. By December 2020, one Bitcoin was worth around $20 thousand, gaining back the momentum. The currency kept rising and as of March 2021, one Bitcoin is worth more than $50 thousand. 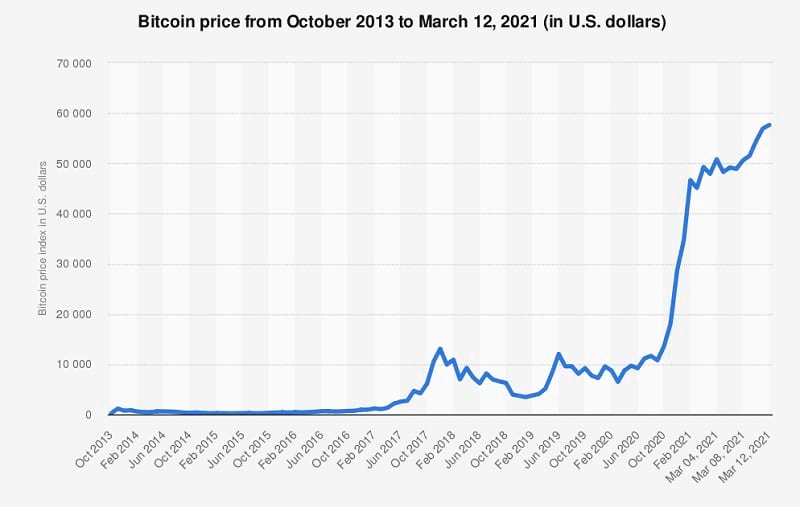 Why Are Bitcoin’s Price on a Record High?

As I have mentioned, presently Bitcoin prices are on a record high and they are expected to increase in the coming days. Ideally, the following are some of the major reasons for the surge in Bitcoin’s evaluation in the present time.

With time, various companies and institutes have realized the power of Bitcoin and that the currency is not going anywhere. Not only are major companies accepting Bitcoins as a mode of payment, but they are even converting their assets into cryptocurrencies.

Bitcoins are driven by scarcity

Bitcoin goes through a vital process, which is known as “Halving” once every four years. This year, the popular cryptocurrency implemented it as well that cuts the reward for Bitcoin transactions to half.

Ideally, the Bitcoin Halving process automatically doubles the stock-to-flow ratio that boosts the worth of the currency. There are just 21 million Bitcoins in total and the process of scarcity only surged its worth.

Cryptocurrencies are no longer limited to professionals or dedicated companies. Now, with the presence of so many digital wallets and cryptocurrency apps, anyone can invest in Bitcoins. A lot of people consider investing in Bitcoins monthly that has made the currency stable than ever. The involvement of millions of people has boosted the valuation of Bitcoin.

Earlier in 2020, PayPal has also integrated Bitcoin as a legal payment method. This means, more than 350 million users of PayPal can now use Bitcoin to buy products and services from over the 30 million merchants that it supports. The news was widely welcomed by investors and global marketplaces, making Bitcoin’s valuation stronger than ever.

Support by the government

While the Bitcoin transactions were under scrutiny by a few countries in the past, it has gained almost global acceptance now. Today, some of the biggest countries in the world like the USA, Australia, Germany, Canada, India, Japan, etc. have made the Bitcoin transaction legal. Gradually, more countries are making Bitcoin legal, and some are even encouraging its citizens to invest in it.

Apart from that, Bitcoins have been around for over a decade now and have emerged as a leading currency. The ongoing inflation and market risks have also evidently made Bitcoin a more stable investment alternative.

How to Play the Bitcoin Lottery on Multilotto?

If you also want to ride the Bitcoin wave, then why not participate in a Bitcoin lottery. In this way, you can take home an evident amount by investing a little. You can just head to the Multilotto Bitcoin lottery page to know more.

Except for Sunday, the Bitcoin lottery at Multilotto takes place every day and you can get a single line at just $3. Players simply need to pick 6 numbers from the range of 1 to 49 and can win a jackpot as high as Ƀ100. Needless to say, by investing just $3, you can win a life-changing amount at this extremely rewarding Multilotto Bitcoin lottery.

Now when you know about the rise of Bitcoin, you must be willing to invest in this cryptocurrency as well. One of the best ways to get more Bitcoins and increase your wealth is by getting the Bitcoin lottery lines on Multilotto. You can later consider investing in Bitcoins or simply trade them to grow your wealth.

Make Deposits on Multilotto with Bitcoin or Other Cryptocurrencies

Besides the bitcoin lotto game, Multilotto also supports bitcoin deposit & withdrawal solutions.  Here’s how you can use Bitcoin at Multilotto: